All Collections
Forms at home
Questions & answers
How do email notifications for form responses work?

How do email notifications for form responses work?

We can email you when there are forms in your inbox requiring action. Here's how it works.

Since our version 5 update, we've had the ability to email you when there are items in the Finger-Ink Inbox requiring your attention.

If you've only just joined Finger-Ink, we'll have email notifications enabled by default. That said, they will only be going to whoever is specified as your account administrator in Cliniko.

If you've been a customer of ours for a while, it won't be on. The first step is to go into your Inbox settings (either via the settings icon in the Inbox itself, or via the Settings page):

The exact setting you'll want to enable is this one:

When enabled, you'll be asked to select the user(s) to which these emails should be sent.

Emails occur whenever there are new items in the Inbox 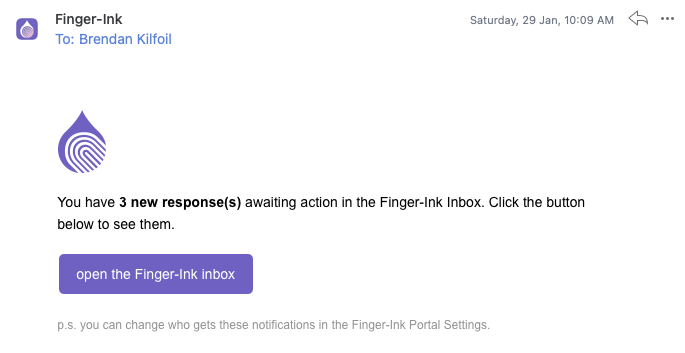 These notification emails will send every time there's new activity in the Inbox, whether or not you've already seen this new activity.

What is considered new activity?

In order to reduce the chance of our emails being marked as spam, we only send emails after any inbox activity has "settled down" for a minute or so.